FLASH SALE: Save 90% on the complete Valentine's Day Printable Library! GET INSTANT ACCESS TO 100+ PAGES HERE

How to have an Olympic themed party that will earn you a gold medal! Simple Olympic party ideas including favors, food, decor, games, and more!

Whether you are planning an Olympic viewing party for the Beijing 2022 Olympics or just want to throw a fun Olympic theme party, you'll find these simple ideas to be GOLD!

Your Olympics party will be so easy to plan when you choose one or a few of these ideas to celebrate with!

Create a fun spread of fruit and dip by using bowls of fruit in the colors of the Olympic flag. The "gold medal" toffee dip is to die for. This easy recipe is great for Olympic parties or Opening/Closing ceremony parties.

Here's the recipe for the easy gold medal fruit dip!

This idea via Living Well Spending Less is so cute for a lunchbox, dinner, or snack to eat while you're watching the Olympics! Just grab some Crunchy Cheetos and place them in ice cream cones for an Olympic themed party food. 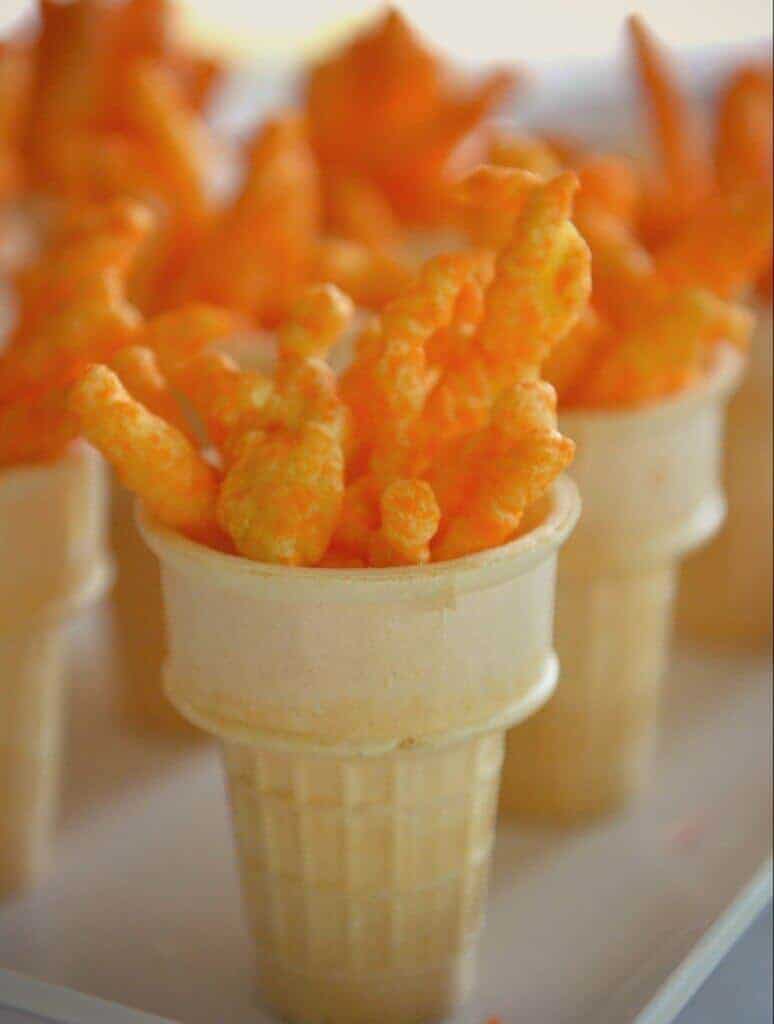 I don't know if Olympic-themed treats can get any easier than this! Idea via Mom Outnumbered

Give your friends, children, or spouse the G O L D! Or set some of these cute party favors out at your Olympic Party!

Get the printable download in our Olympic Party Pack here.

Looking for olympic party ideas for adults? Play this fun Olympic Trivia game. See how well you know the history of the Olympics with this fun 10-question trivia game! Give the winner a bag of gold (like shown above!) Get the printable trivia game here.

No Biggie shares this simple tutorial for creating Olympic Ring Candy Jars. These would be fun for an opening ceremony night party or just to keep up throughout the duration of the Olympics as you watch your favorite sports.

These free! and cute mini world flag buntings would be such a simple Olympic party decoration! Make a game out of it and see if your guests can guess which flag belongs to each country. Get the free printable here.

How cute are these DIY Olympic Chocolate Medals? Just attach chocolate coins to some ribbon for an Olympic gold medal craft everyone will want to win!

Play Party Plan has some fun Winter Olympic party games you can play at home! I'm adding some of these our list!

For a simple party game, have Gold, Silver, and Bronze Guessing Jars! Have your party guests guess how many candies are in each jar and whoever is the closest, wins!

Short on time? Here's some great inexpensive Olympic party supplies and Olympic party decorations you can have delivered straight to your door!

Now you can throw an amazing Olympic party with these simple ideas!