FLASH SALE: Save 90% on the complete Valentine's Day Printable Library! GET INSTANT ACCESS TO 100+ PAGES HERE

This post may contain affiliate links. I only recommend products I use and love.

How to make the best spudnuts doughnuts (doughnut tutorial with photos). This homemade donut recipe calls for mashed potatoes, which makes them extra light and fluffy! Our friends say these doughnuts are better than Krispy Kreme! 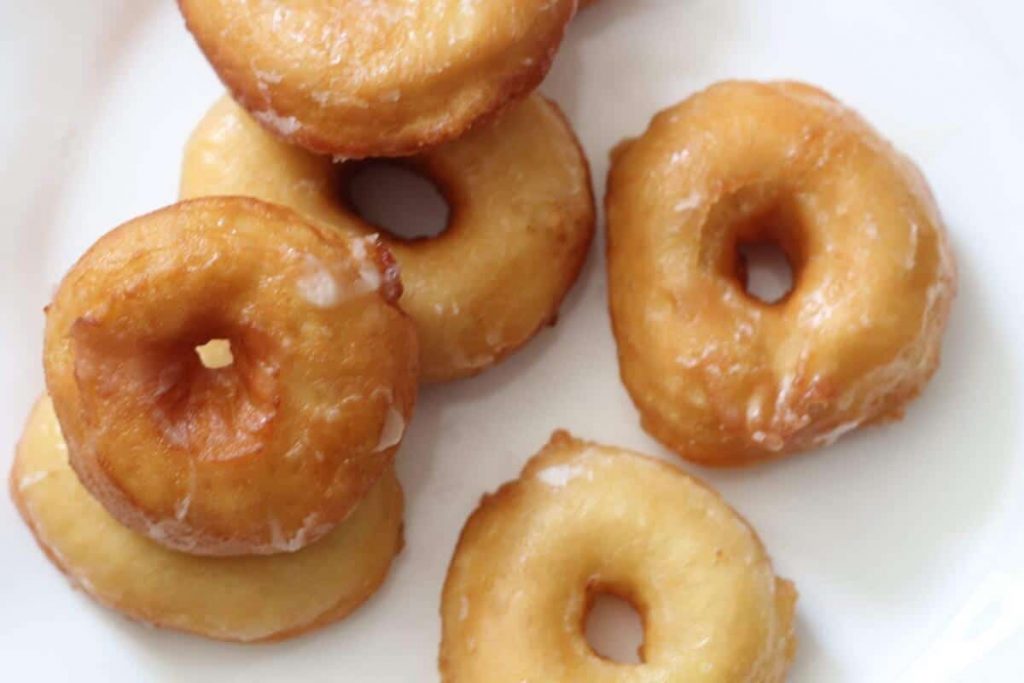 Spudnuts doughnuts are a yeast donut made with mashed potatoes. Before you get scared off, let me assure you that the potatoes make these doughnuts extra light and fluffy.

Our friends have said these homemade spudnuts are better than Krispy Kreme donuts, so if that isn't proof to the deliciousness of this doughnut recipe, I don't know what is.

We have been making this spudnuts donuts recipe every Fall for the last 13 years and host a huge open house for neighbors and friends.  We crank out 300-400 spudnuts, so we have lots of tips and tricks up our sleeve to share with you.

Whether you want to gather friends for a fun evening or just want to make them with your family, this recipe for potato doughnuts is a keeper. 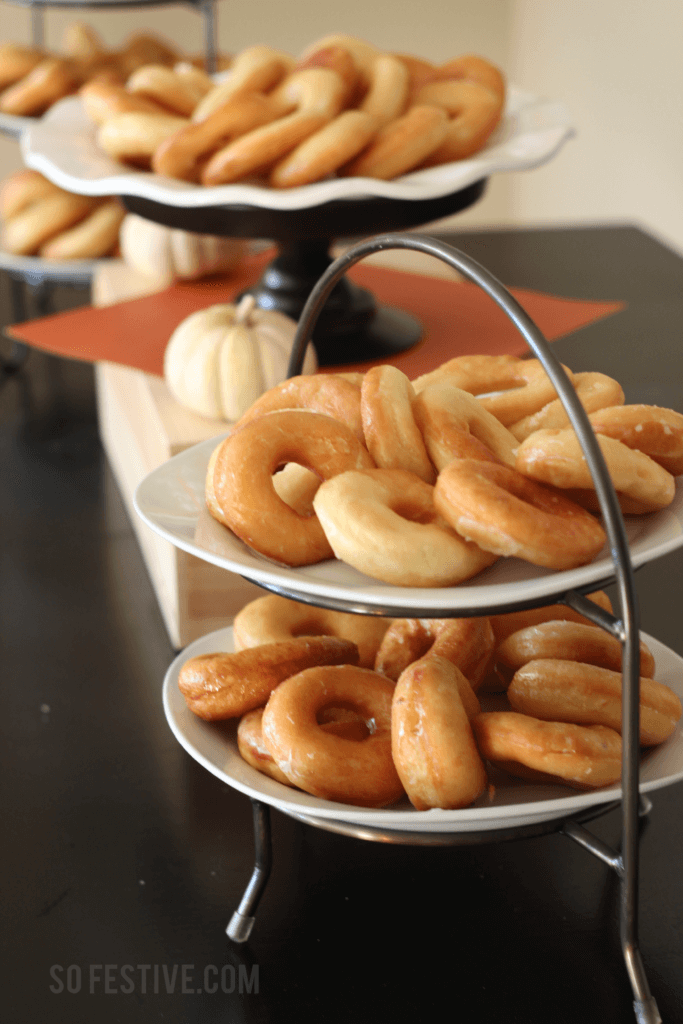 WHAT YOU NEED TO MAKE THIS SPUDNUTS RECIPE

HOW MANY SPUDNUTS DOES THIS RECIPE MAKE?

Each batch of this recipe makes 90-100 spudnuts, if you use a standard donut cutter.

You can definitely cut the recipe in half if you don't want that many. Or feel free to double or triple if you are hosting a large doughnut open house.

HOW LONG DOES IT TAKE TO MAKE SPUDNUTS DOUGHNUTS?

Making amazing spudnuts is a labor of love. But trust me, it's work worth doing. All the steps are simple. Just be prepared to be in the kitchen on and off for a few hours until you have hot spudnuts to eat.

So yes, this is a long process, but an easy one. You'll need to dedicate about 3-4 hours of hands on time (with breaks in between). But they are so worth it! And you will become quite popular. Just saying. 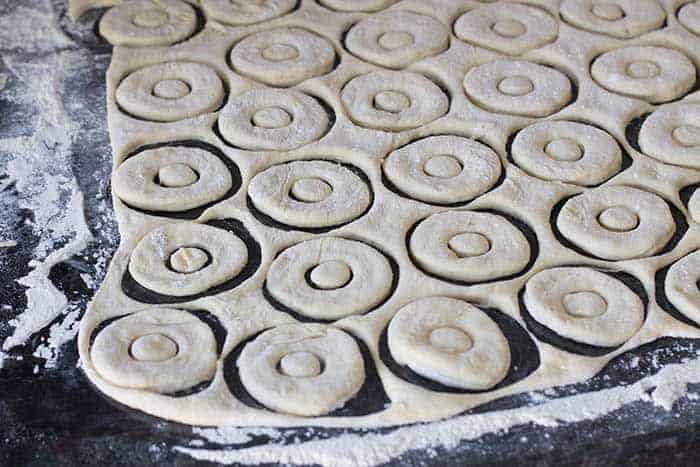 HOW TO MAKE SPUDNUTS DONUTS : DOUGH

Mashed potatoes are the key ingredient in these homemade doughnuts. You can use instant or real mashed potatoes.

We prefer to use real potatoes. If you choose to also, make the potatoes a day or two in advance and keep in the refrigerator until you make the dough. This will save you tons of time.

Be sure the mashed potatoes are smooth and don't have any big lumps. You can add more milk to get this consistency. Don't add butter, salt or pepper.

Scalding milk is easy. Add the milk to a sauce pan. Turn the stove to medium heat.

Stir the milk until there is a thin film on top. It happens right before the milk boils. .

Remove the milk from heat and let it cool.

You'll still want it slightly warm to help activate the yeast. But it should not be hot to the touch. 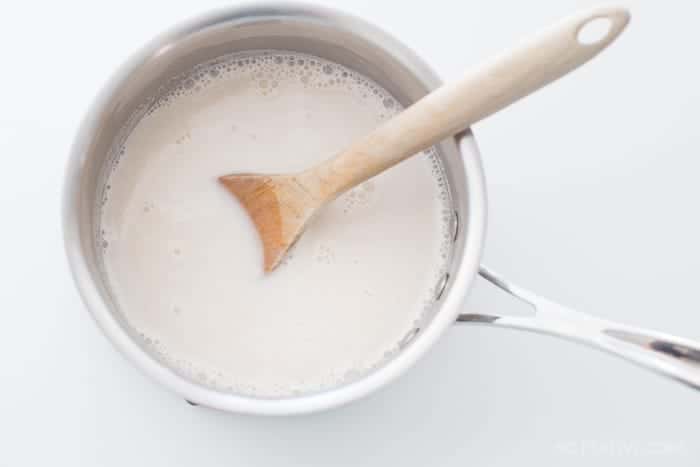 3| Mix yeast, sugar, and water together

While the milk is cooling (you can put it in the fridge to speed up the process), mix the yeast, sugar, and water together in a glass measuring cup.

Set this aside for about 5 minutes until bubbly.

See how frothy and bubbly it is? That is the key to light and fluffy spudnuts doughnuts. If your yeast mixture doesn't look lie this after 5 minutes, start over. 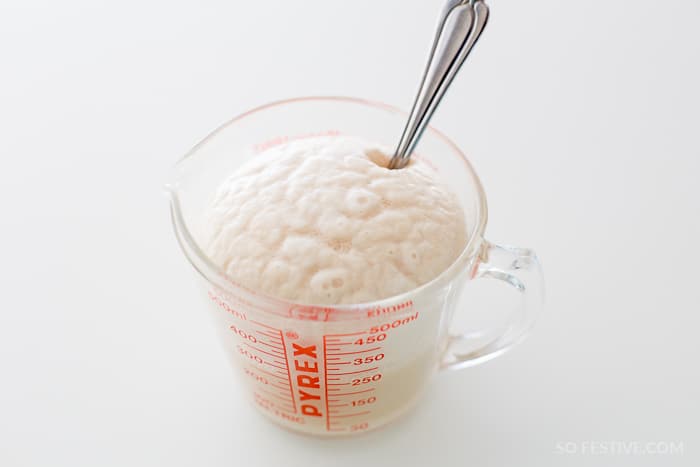 4| Combine it all to make a dough

Slightly beat the eggs and set aside. Cream sugar and shortening together in a new bowl. Add in the eggs and potatoes and mix well. Then add yeast mixture and cooled milk. Slowly add in flour and salt. (You will probably add in an extra 2 cups of flour so that it isn't sticky.)

The dough will get very heavy and thick. You can use a Kitchenaid or Bosch for this process, but once you add in about 8-10 cups, it's usually best to finish mixing by hand to avoid burning out the motors of your machine.

Once the dough is mixed well and smooth, let rise in a large bowl with a clean towel over the top. Let rise for at least 1 ½ hours, but up to 3-4 hours is fine.

1| Prep the surface and roll

Generously flour a clean surface. Roll the dough about ½ inch thick. Smile because you are having fun 🙂 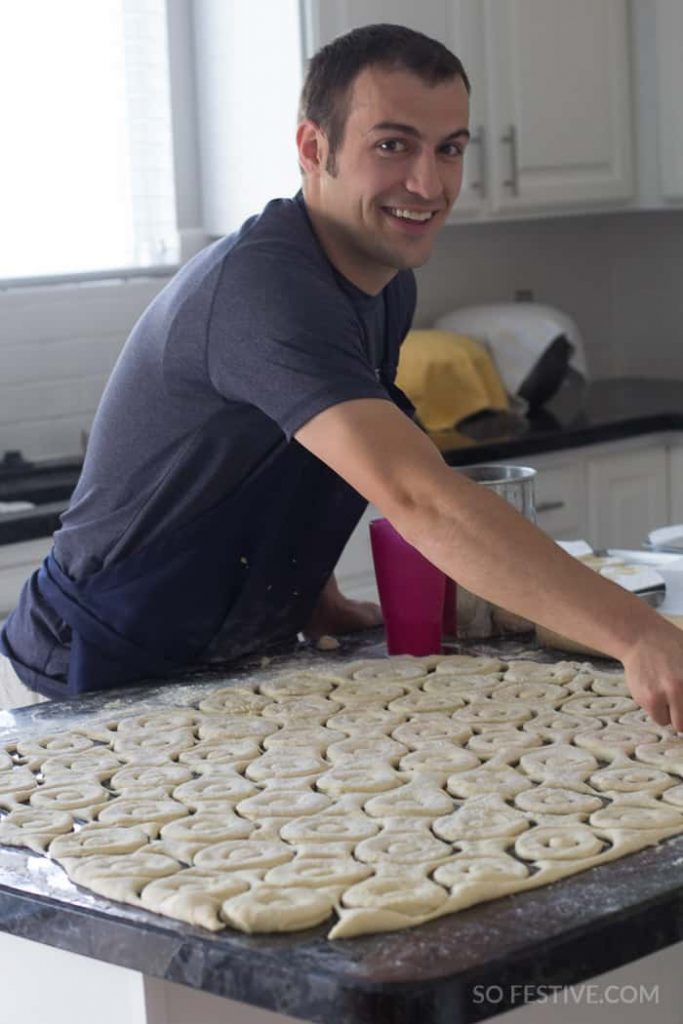 Use a donut cutter or a sturdy cup and bottle lid to cut donut shapes and holes out of the dough. Using this inexpensive donut cutter will definitely save you tons of time,but either method works!

You can save the donut holes for frying or mix back into the dough to use for more doughnuts!

Once all the donuts have been cut, move them to trays covered with wax paper. The wax paper is optional, but sure cuts down on clean-up time!

You will need lots of trays. If you don't have a lot of baking sheets (these are our all-time favorite baking sheets), buy some cheap rectangle trays at the dollar store. We invested in 10 from Dollar Tree and use them for our spudnut night. I don't love baking on them, but for letting donuts rise, they are perfect!

HOW LONG TO RISE BEFORE FRYING

Let the spudnuts rise at least half an hour before frying.  However, by the time you are finished rolling out all the spudnuts, you could start frying. They can rise up to a few hours and still turn out!

Tip: While they are rising is a good time to start cleaning up what you can and get prep for frying.

Fill oil into a deep fat fryer or electric fry pan. We use both to speed up the frying process, but prefer an electric fry pan because it holds more donuts. You'll need enough oil so that the donuts can sit at least half way into the oil.

HOW MUCH OIL TO USE 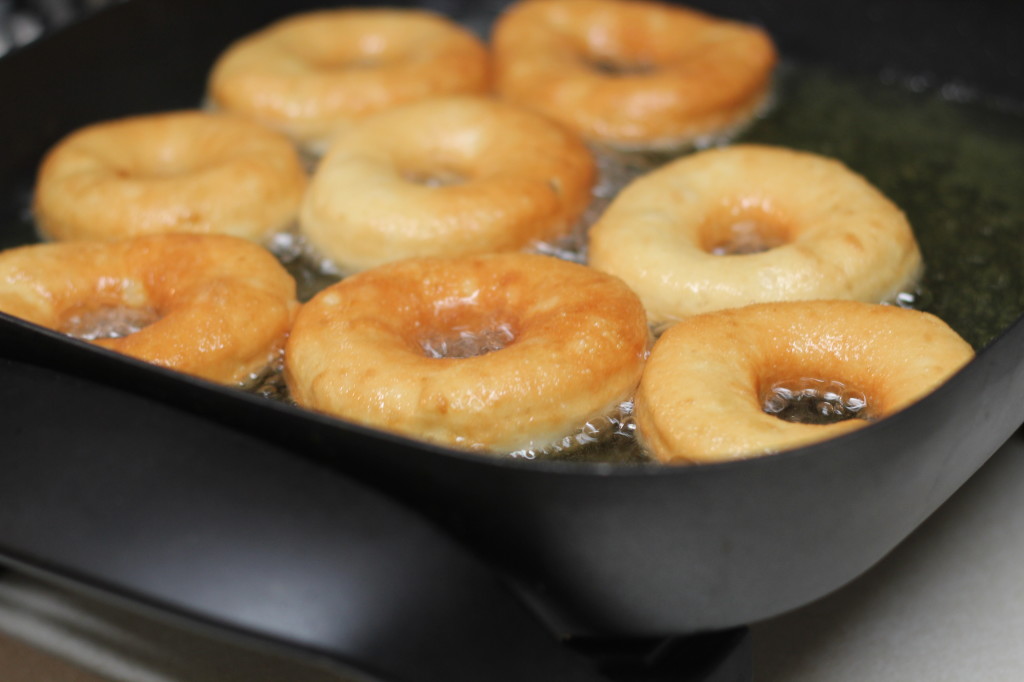 HOW LONG TO FRY SPUDNUTS

Fry the spudnuts until they are golden brown and then flip. Once both sides have been cooked, move them to a pan lined with paper towels. Let the grease drain for a minute or so.

You will go through lots of paper towels during the process, so be sure to have about 1 roll. For easy cleanup, use a disposable baking pan to let the donuts cool in like this: 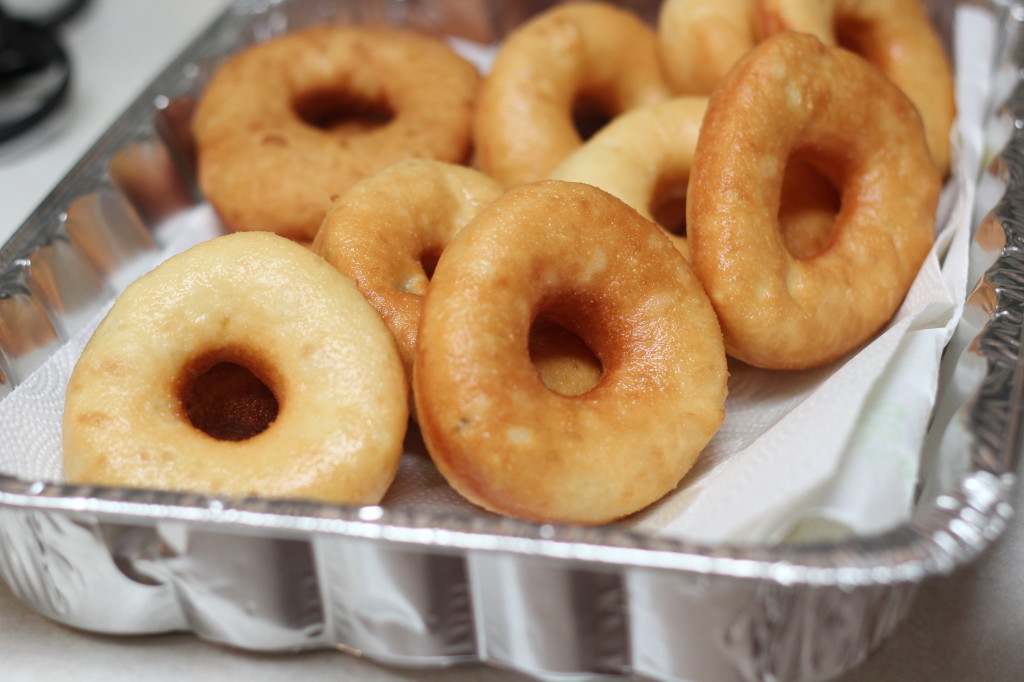 While the spudnuts are still warm, dip them in homemade glaze  (recipe below). My sister taught us the best trick. Use chopsticks for this process. Slide the chopstick through the hole and then you can glaze a few at a time.

Let the glaze drip off a little bit before you move them to serving platters.

Repeat the process until all the spudnuts doughnuts have been fried and glazed. 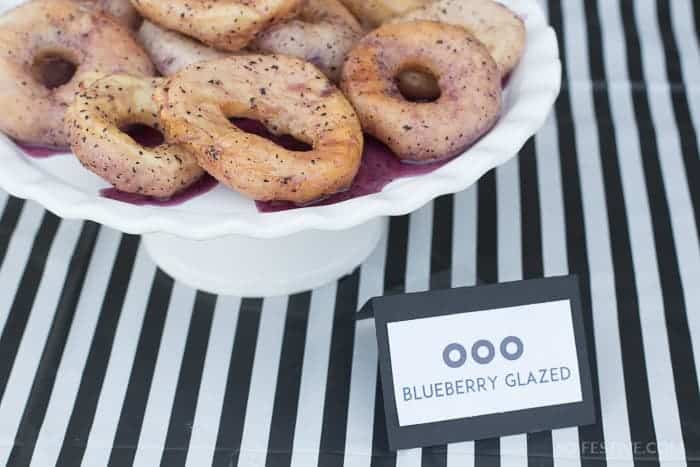 Pin this for easy reference later! 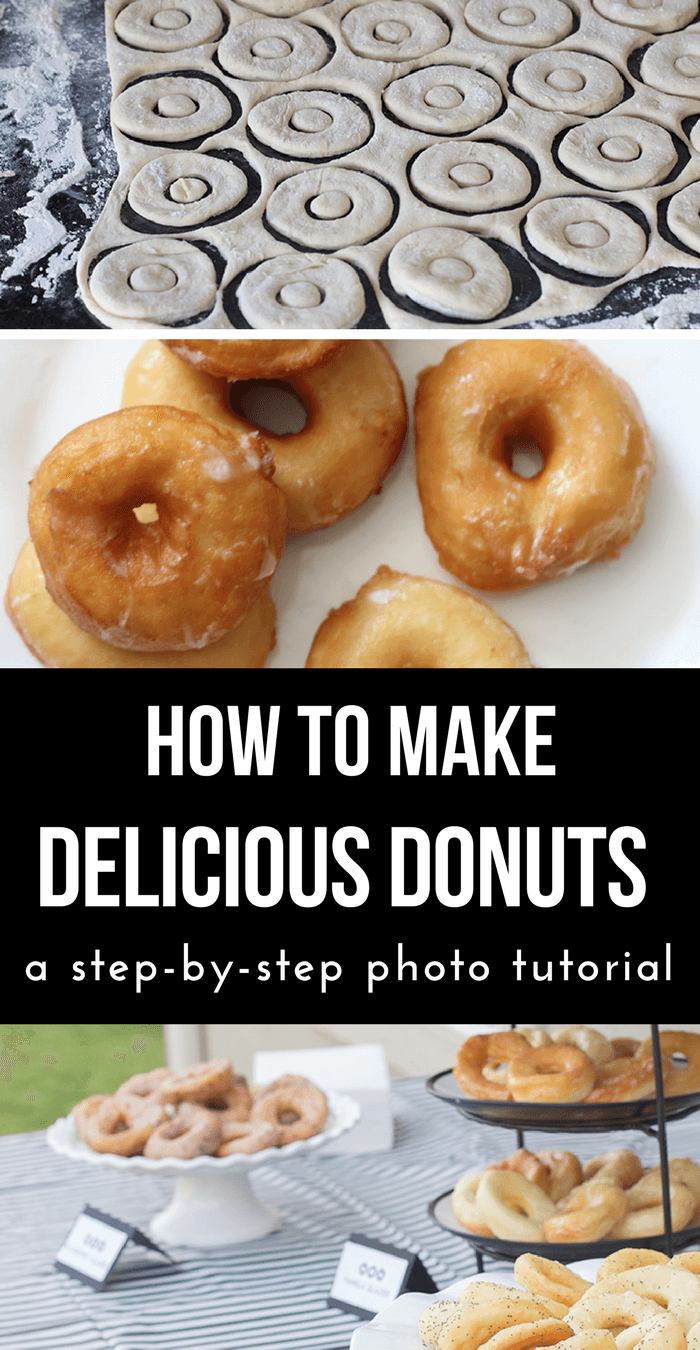 Okay, so you're ready to try making doughnuts, donuts, or spudnuts? Whatever you want to call them, here's the spudnut recipe for melt in your mouth goodness... Enjoy! From our kitchen to yours, I hope you enjoy this doughnut recipe as much as we have!

Amazing homemade doughnuts made with spuds to make them extra soft and fluffy. One batch makes nearly 100, making it a great recipe for gatherings!

These spudnuts are so delicious fresh and hot, but they are also good the next day. Eat as is or warm in the microwave for 8-10 seconds.